The Life and
Legacy of Joel Augustus Rogers: Chronicler of a Glorious African Past 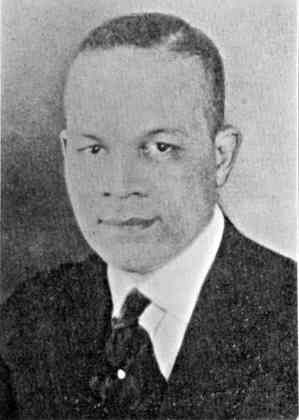 Although Joel Augustus Rogers was largely self-trained, some of the most distinguished scholars of the twentieth century have acknowledged our debt to him. Dr. William E.B. DuBois (1868-1963), perhaps the greatest scholar in American history, wrote that, "No man living has revealed so many important facts about the Negro race as has Rogers." The eminent anthropologist and sociologist J.G. St. Clair Drake wrote that:

"No discussion of comparative race relations would be complete without consideration of the work of the highly motivated, self-trained historian Joel A. Rogers. Endowed with unusual talent, Rogers rose to become one of the best-informed individuals in the world on Black history, writing and publishing his own books without any kind of organizational or foundation support."

"Rogers came from Jamaica in the West Indies. He settled in Chicago. He eventually took a job as a Pullman porter so he could visit different cities and libraries and do research. I got an interesting story about that. The story was that in a lot of large cities a lot of libraries were for whites only. Black people weren't permitted to go into them. So Rogers had to pay the Pullman conductor to go to the libraries and take out books from them. The conductor said, "Rogers, I believe you're a damn fool. But if you want to throw away your money that way, I'm willing to cooperate."

Rogers was a field anthropologist. He traveled to sixty different nations and did a lot of research and observing. He had been told when he was a child in Sunday School that God had cursed the Black man and made him inferior. Rogers wanted to prove that the Black man was not inferior."

After a short illness, Joel Augustus Rogers died in New York City in March 1966 at the beginning of the Black Studies movement. His widow, Helga M. Rogers, reported that "he suffered a stroke while visiting friends and continuing to do research in Washington." His labors, however, were not in vain. He impact was enormous, his legacy colossal, his place in history secure. Joel Augustus Rogers was a man without peer in gathering up and binding the missing pages of African history. Indeed, Rogers, in the words of Dr. John Henrik Clarke, "looked at the history of people of African origin, and showed how their history is an inseparable part of the history of mankind."
"Ethiopians, that is, Negroes, gave the world the first idea of right and wrong, and thus laid the basis of religion and all true culture and civilization."
J.A. ROGERS

Joel Augustus Rogers: The Man and His Work

Joel Augustus Rogers (1883-1966) was a world traveler, a prolific writer, an accomplished lecturer, and the first Black war correspondent. Rogers became an anthropologist, historian, journalist and publisher. He was a scholar unparalleled in assembling information about African people, and probably did more to popularize African history than any single writer of the twentieth century.

J.A. Rogers, born in Negril, Jamaica, on September 6, 1883, was the son of a small town school teacher (his father). In 1906 he moved to the United States, settling for a while in Chicago but spending most of his life in Harlem, New York. In 1917 he became a naturalized U.S. citizen.

Rogers had known Marcus Garvey from their youth in Jamaica. In 1923 he covered the Marcus Garvey trial, and although never a member of the Universal Negro Improvement Association and African Communities League, of which Garvey was founder and President-General, he wrote regularly for the UNIA's weekly newspaper, the Negro World, and lectured to local UNIA chapters.

A prodigious and meticulous detective, Rogers did exhaustive, primary research into the global history of African people. In 1925 he went to Europe for investigations in the libraries and museums there. In 1927 he returned to Europe for research lasting three years, and journeyed to North Africa during the same period. Between 1930 and 1933 Rogers continued his explorations in Europe, while in 1930, 1935 and 1936 he pursued his researches in Egypt and Sudan.

The year 1930 was indeed a high water mark in Rogers' career, for it was in that year that Rogers went to Ethiopia as a correspondent for the New York Amsterdam News to attend the coronation of Haile Selassie I, who presented him with the Coronation Medal. It was also in 1930 that Rogers spoke at the international Congress of Anthropology held in Paris and opened by the president of France.

Rogers' organizational affiliations included the Paris Society of Anthropology, the American Geographical Society, the American Association for the Advancement of Science and the Academy of Political Science.

For fifty years of his life, Rogers investigated and reported the accomplishments of ancient and contemporary African people and their place in history, contributing to such publications as the Crisis, American Mercury, the Messenger, the Negro World and Survey Graphic. To the Pittsburgh Courier Rogers contributed an illustrated feature entitled Your History.

When publishing houses refused to publish his works, undeterred, Rogers published them himself. All told, J.A. Rogers wrote and published at least sixteen different books and pamphlets. These publications became classic works--works that were circulated primarily in African communities. Rogers' texts covered the entire spectrum of the global African community, from ancient and modern Africa, to Asia, Australia, the South Pacific, Europe and the Western Hemisphere.

Among Rogers' most acclaimed and prominent works are: From Superman to Man, One-Hundred Amazing Facts About the Negro, The Real Facts About Ethiopia, Sex and Race, Nature Knows No Color-Line, and World's Great Men of Color. 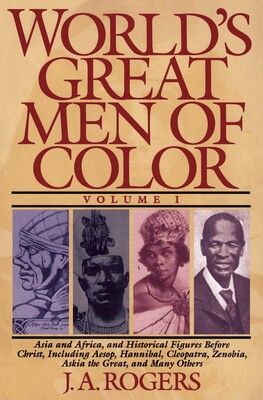 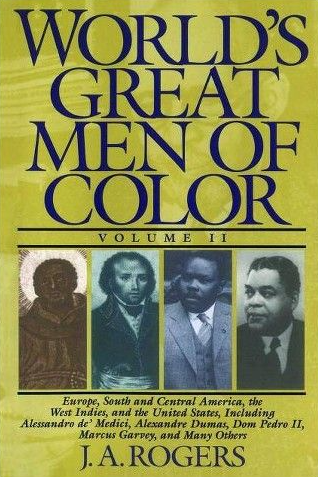 Rogers' first publication, From Superman to Man, was published in 1917 and focused on "the stupidity of racism." The book was so well received that is was recommended for reading in the original Constitution and By-Laws of Garvey's Universal Negro Improvement Association and African Communities League. Dr. Hubert Henry Harrison (1883-1927), himself a brilliant scholar and one of the greatest orators of the twentieth century, referred to From Superman to Man as "a genuine treasure," and insisted "that it is the greatest book ever written in English on the Negro by a Negro."

One Hundred Amazing Facts About the Negro With Complete Proof: A Short Cut to the World History of the Negro went through many printings and at least eighteen editions. A singularly provocative quote in One Hundred Amazing Facts About the Negro is by the English scholar and traveler Samuel Purchas (ca. 1575-1626)). According to Rogers, Purchas claimed that "of all (the kings of Ethiopia), Ganges was most famous, who with his Ethiopian army passed into Asia and conquered all as far as the River Ganges, to which he left that name." This was a particularly interesting statement for me personally and helped catapult me on my own researches concerning the African presence in Asia. In the same book Rogers mentioned that "Beethoven, the world's greatest musician, was without a doubt a dark mulatto. He was called `The Black Spaniard.'"
In 1935, dissatisfied with the reporting of news by the White press concerning the Italian invasion and occupation of Ethiopia, Rogers served as war correspondent in Ethiopia for the Pittsburgh Courier newspaper. After returning to the United States in 1936 he published a highly popular illustrated pamphlet entitled The Real Facts About Ethiopia. In The Real Facts About Ethiopia Rogers wrote that the Ethiopian woman "goes with her husband to war, and often becomes his avenger, should he fall. Usually she is fiercer in battle than the man. Europeans sometimes kill themselves, rather than fall into the hands of the African woman."

Sex and Race was published in three volumes from 1941 to 1944. The first volume focuses on antiquity and is arguably the most fundamental of the three. As to ancient Asia, for example, Rogers devoted several pages of Sex and Race to the Black presence in early Japan. In the process he cites the studies of a number of accomplished scholars and anthropologists, raising the question "were the first Japanese Negroes?"

Other chapters are devoted to "The Negro in Ancient Greece," "Negroes in Ancient Rome and Carthage" and "Were the Jews Originally Negroes?" The appendices of Sex and Race are equally fascinating, focusing on "Black Gods and Messiahs" and the "History of the Black Madonnas." In Volume Two of Sex and Race Rogers examines "racism and race-mixing in the New World," while Volume Three of Sex and Race seeks to define the concept of race itself. Like most of his works, all three volumes of Sex and Race are lavishly illustrated. 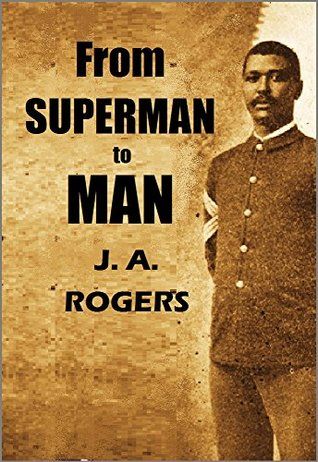 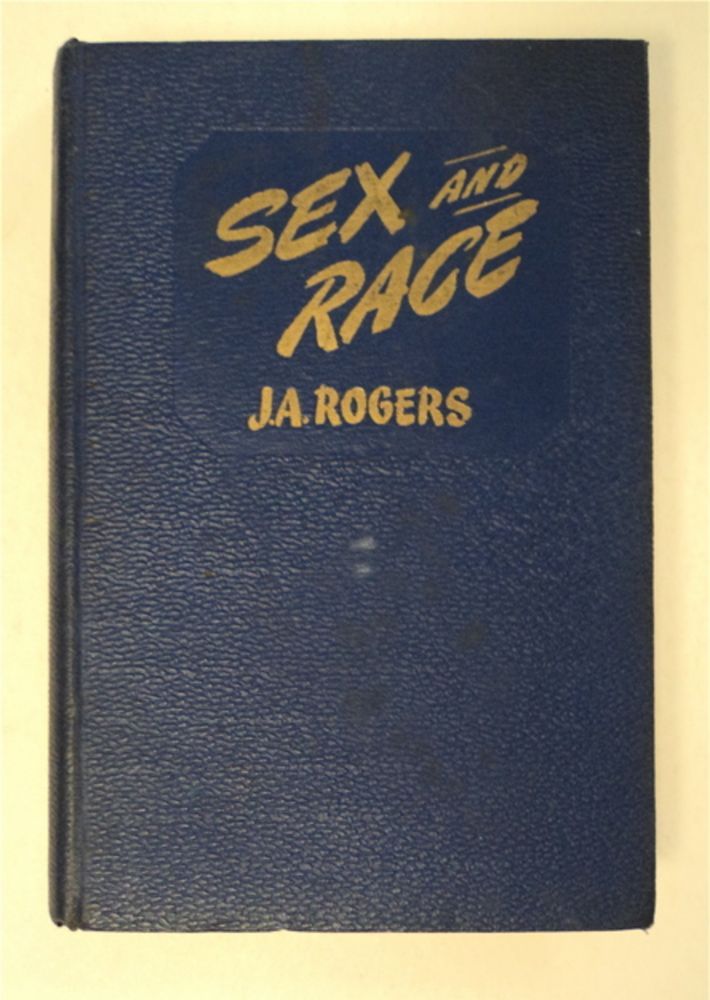 Knarrative is committed to helping Black people, across the Diaspora, know our history, create our own stories, and understand ourselves through explorations of the past so that we can grow brighter futures.

Your  free account is scheduled to be removed from the site by April 30th, 2022. Upgrade to a monthly or yearly subscription to continue using Knarrative and unlock all available resources today!

Our brand new webinar is ready! Reserve your spot now and be a part of a memorable online experience.
Get started

Let us introduce our school