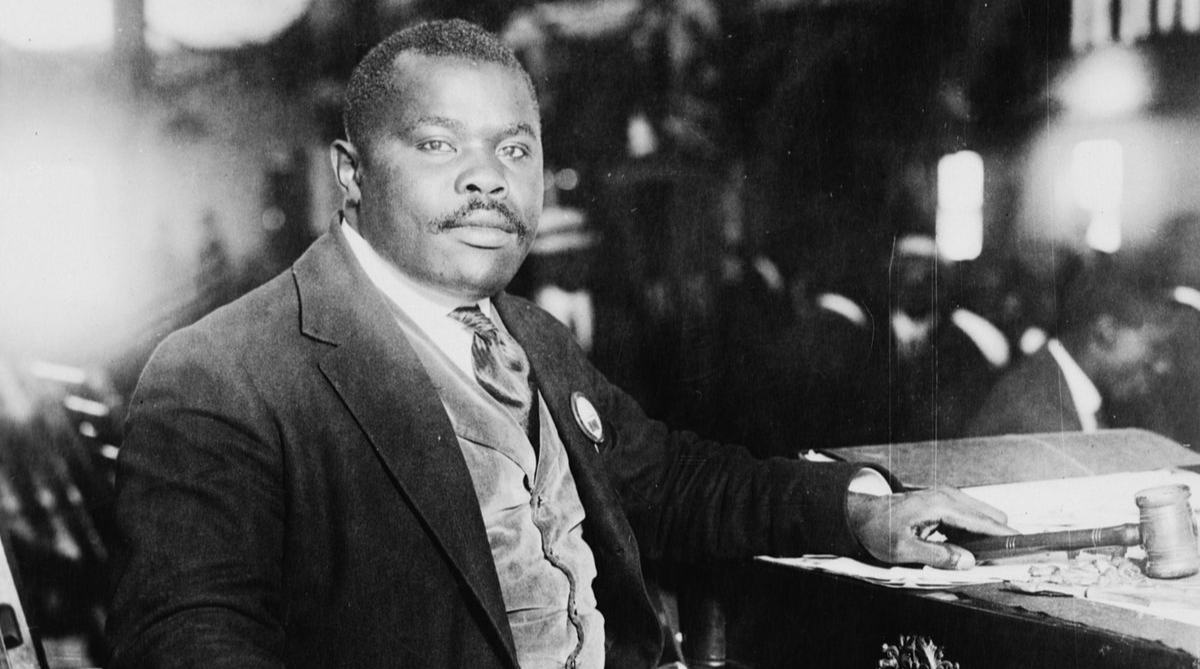 Marcus Garvey
Marcus Garvey was a black nationalist born on August 17, 1887, in St. Ann's Bay, Jamaica. He was known as the face of pan-Africanism and played a major role in the “Back to Africa” movement.

Garvey was the last of 11 children born to Marcus Garvey, Sr. and Sarah Jane Richards. In 1903, he traveled to Kingston, Jamaica where he got exposed to activism and became involved with union activities. In 1914, Garvey founded the Universal Negro Improvement Association (UNIA) in Jamaica.

The UNIA sought to build a black-governed nation in Africa. He was able to grow the organization into one with multiple chapters in countries such as the United States, Cuba, the United Kingdom and others.

The first commercial venture of the UNIA was to establish the Black Star Line Steamship Corporation with the goal of creating an efficient mode of transportation, communication and trade among black people worldwide. The public could invest in the corporation by purchasing stock shares at five dollars each.

Garvey traveled to the United States in 1916. While spending time in the United States, he became a controversial figure to some, including J. Edgar Hoover. Hoover was the head of the FBI, and he established a special counter-intelligence program called COINTELPRO, to neutralize political figures such as Garvey.

COINTELPRO sought to stop the rise of a “black messiah,” that could unify black people. Therefore, Hoover hired the FBI’s first Black agent just to infiltrate the UNIA and monitor Garvey.

The party hoped to address issues such as official representation in the British Parliament, judicial reform, a Jamaican university, minimum wage, land reform, a government-run electrical system, and public high schools and libraries.

Although Garvey may have been viewed as an enemy by J. Edgar Hoover, that was not the case everywhere. His message of pride and dignity was an inspiration to his countless supporters and served as a precursor for the Civil Rights Movement.

Your  free account is scheduled to be removed from the site by April 30th, 2022. Upgrade to a monthly or yearly subscription to continue using Knarrative and unlock all available resources today!

Our brand new webinar is ready! Reserve your spot now and be a part of a memorable online experience.
Get started

Let us introduce our school

Write your awesome label here.
Ancient Egyptian Materials and Technology (Excerpt)
by Paul T. Nicholson and Ian Shaw (Editors)
Aimed primarily at Egyptologists and archaeologists, this book covers all aspects of craftwork in ancient Egypt, from the construction of the pyramids and the carving of statues to techniques of mummification, boat-building, jewelery making, ancient brewing, carpentry, hairstyling, tailoring and basket weaving. Drawing on archaeological, experimental, ethnographic and laboratory work, it is the first book since the 1920s to describe current research into the actual basics of life in Pharaonic Egypt
The Birds of Ancient Egypt (Excerpt)
by Patrick F Houlihan
The aim of this book is to provide a systematic survey of all the species represented in ancient Egyptian art and hieroglyphs. In addition the birds' role in secular and religious life is examined and an attempt is made to compare present day range with that of antiquity.
The Eloquent Peasant
Excerpt by Miriam Lichtheim
First published in 1973, this anthology has assumed classic status in the field of Egyptology and portrays the remarkable evolution of the literary forms of one of the world’s earliest civilizations. Beginning with the early and gradual evolution of Egyptian genres, it includes biographical and historical inscriptions carved on stone, the various classes of works written with pen on papyrus, and the mortuary literature that focuses on life after death. It then shows the culmination of these literary genres within the single period known as the New Kingdom (1550–1080 B.C.) and ends in the last millennium of Pharaonic civilization, from the tenth century B.C. to the beginning of the Christian era.
The Nine Petitions of the Farmer Whose Speech is Good
Excerpt by Jacob Carruthers
“Does the Word in Africa have a proper meaning? Could a diachronic study of the Word in Africa be undertaken? What is the meaningful particularity of the African Word since the Egyptian Mdw Ntr (hieroglyphs) to Nommo, the Spoken Word of the Dogon of Mali? All these questions pertaining to History and Philosophy are carefully and thoroughly examined in this book. It is a great honor to recommend this book not only to the specialist but to all those interested in conducting research in African and African American studies.” –Prof. Theophile Obenga
Translating Wordplay in the Eighth Petition of The Eloquent Peasant: A New Interpretation
by Dr. Mario Beatty
A close philological examination of wordplay in line B I, 337/B2, 72 in eighth petition of The Tale of the Eloquent Peasant yielded a variety of different and plausible translations. This paper seeks to explain the state of ambiguity that hovers over translating this line, examine major existing translations, and provide a new translation and interpretation of this line. The paper attempts to prove that the elaborate wordplay in this line actually refers to Thoth. As a result, the sequential narrative mode of exposition that invokes the role of Maat is rendered more intelligible as juxtaposed against and distinguished from Thoth. The paper will conclude by discussing the implications of this new interpretation in the context of the eigth petition and the broader context of the narrative.
Celestial Sphere in Ancient Egypt
by Dr. Mario Beatty
In reading the introductory hymn to the sun-god Ra in the Papyrus of Ani, attention of authors was immediately attracted by the Egyptian word psdw. Neither of the major dictionaries of the ancient Egyptian language (LESKO, 1982; FAULKNER, 1991; Woterbuch de ERMAN et GRAPOW (1926) have this word with the determinative of the sun. In this paper, they show that it is an astronomical term which means the celestial sphere.  (ANKH ARTICLE: N°4-5, 1995-1996 (PP. 215 - 221)
On the Source of the Moon's Light in Ancient Egypt
by Dr. Mario Beatty
In this article, the author shows that the Ancient Egyptians seem to have discovered that the moon shines, but it does not shine from light of its own. It is borrowed light from the sun. In revealing this observation in Ancient Egypt, the author focuses on the Great Hymn to Thoth on the statue of Horemheb and selects passages from the Book of Coming Forth By Day. Based on Ancient Egyptian astronomical observations in these texts, there is significant evidence to conclude that they definitively observed during the New Kingdom (1600 B.C. - 1080 B.C.) that the source of the moon's light derived from the sun. In concluding, he briefly highlights the importance of this discovery relative to the history of astronomy. (ANKH ARTICLE: N°4-5, 1995-1996 (PP. 163 - 177)
Martin Delany and Egyptology
by Dr. Mario Beatty
Abstract: Martin Robinson Delany (1812-1885) was clearly the first African-American to attempt to visually present, transcribe, and translate Egyptian hieroglyphs in a text entitled Principia of Ethnology: The Origins of Races and Color, with an Archaeological Compendium of Ethiopian and Egyptian Civilization from Years of Careful Examination and Enquiry (1879). There has never been any research conducted on descriptively understanding the method and significance of his effort to translate Egyptian hieroglyphs. The purpose of this paper seeks to present a philological and historical examination of his effort to translate Egyptian hieroglyphs historically contextualized as a response to the impact of the famous “American School of Ethnology” and one of its prominent members, George Robins Gliddon, an amateur Egyptologist who played a foundational mediating role in introducing Egyptology and the work of Champollion to American audiences in the nineteenth century. (ANKH ARTICLE: N°12-13, 2003-2004 (PP. 78-99)
Login or sign up to start learning
Start learning
or
Sign up to !
or
click to upload avatar
I accept the Terms & Conditions
I would like to receive news, tips and tricks, and other promotional material
Start your learning journey
Sign in with your account Forgot your password?
Get a brand new password!
OK
Cancel
Enter your brand new password
OK
Cancel